This howto aims at describing the choices and the build of a compact homelab with a hyperconverged chassis based on a Supermicro A2SDi-4C-HLN4F motherboard. The hypervisor OS will be Slackware64-15.0 (with Qemu/KVM for virtualization), the storage will be provided by a Truenas core VM (thanks to pci-passthrough) and network orchestrated by an OPNSense VM.

Why such a motherboard with a modest 4 cores Intel Atom C3558 ? Let's see the advantages : 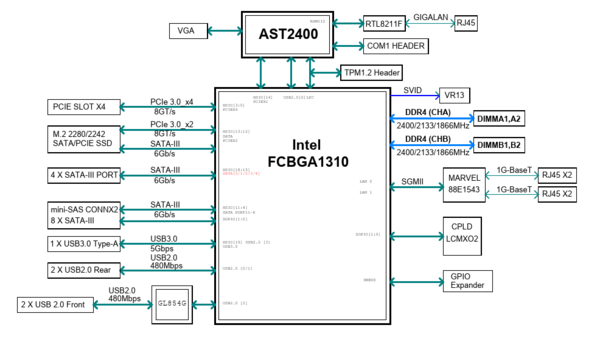 Well, the system has drawbacks too :

What is required for this project :

Choosing between 2.5 (SFF) or 3.5 (LFF) inches drives is not so easy. Obviously, for raw capacity over a gigabit network, LFF HDD are unbeatable in terms of price. In France (as of march 2021), it costs ~ 80 euros for a 2 TB NAS 3.5 LFF HDD ... Same price for a 1 TB NAS SFF HDD. Moreover, SFF HDD over 2 TB simply doesn't exist for consumer NAS systems (enterprise SFF HDDs exist but are way too expensive). LFF HDD are a clear winner ? What about chassis size, cooling, noise and iops ?

At this point, there are two choices :

The most reasonable would be to use LFF HDDs but silent operation in a tiny chassis with decent iops are very important, so let's stick with the "unreasonable" configuration !

As seen earlier, a standard CPU fan cannot be fitted on the heat sink. But we are in the 21st century and 3D printing is available, so why not a custom CPU fan shroud ? ^^ 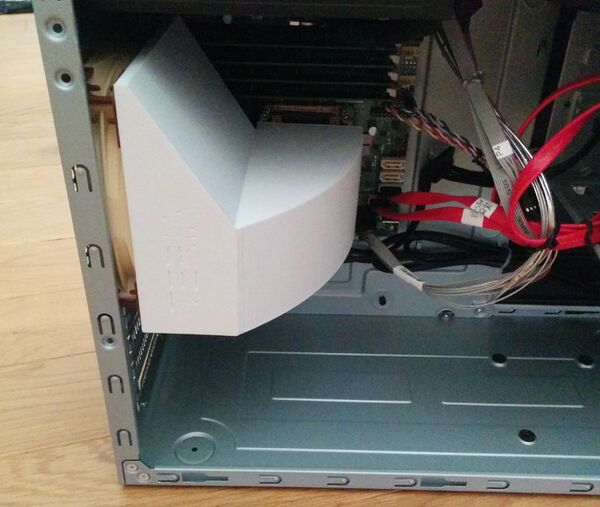 Is it absolutely necessary ? I don't think so. Does it help ? Sure ! On a similar system located in an attic (so hot in summer), I attached the measured temperatures over the last months (see below). No more than 47 °C for the CPU ... Without the fan shroud, I think you should expect overall 5 °C more on average.

First things first, taking control of the BMC. These days, Supermicro's BMC are configured by default for DHCP and dedicated Ethernet port. There is no more the "ADMIN" default password but a random one written on a sticker directly on the motherboard (along with the MAC address of the BMC). Be sure to remember these informations before plugging the dedicated port on a switch of your your LAN.

Then I suggest you configure the BMC with a fixed IP address, not an IP attributed by a DHCP server. If your LAN goes berserk and you have to connect to your BMC, it will be easier. Two choices : through the WebUI (example below) or through the UEFI BIOS. 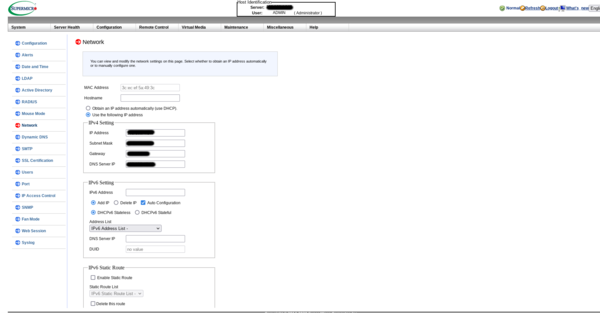 With the BMC configured, you have full control of your system through your favorite Web browser. HTML5 web Console Redirection is a fantastic feature not often available for free with other vendors (such as Dell, HPE or Lenovo for example).

It's of course possible to install your favorite OS by booting thanks to a USB stick. Having already an operational homelab, PXE boot is even easier and quicker. With the Supermicro a2sdi-4c-hln4f, there is just one caveat : no legacy boot available, only UEFI (well, the manual and options within the BIOS suggest legacy should be possible but in reality it's not working at all).

Through the UEFI BIOS options, you should verify the boot order or press F12 during the boot of the system and choose UEFI Network.

Let's assume a Slackware Busybox prompt is available (resulting either from booting with a USB key or through network). The soft RAID 1 has to be configured at this stage, of course on the right disks ! (remember, the system is composed of 6 drives, 2 SSDs for OS and 4 SSDs for data).

Reference documentation for this kind of setup :

I recommend two identical partitions per disk (sde and sdf) such as :

When you're done with one disk (e.g. sde), you can clone the partionning to another disk (e.g. sdf) with these commands :

Then you can launch the famous Slackware setup command and proceed through the OS installation itself. Don't forget to create an initrd (thanks to mkinitrd_command_generator.sh which should choose the right options) and be sure to use elilo (or grub) as a bootloader.

Here is my elilo.conf as an example :

It's the tricky part ... Supermicro does not allow a command such as efibootmgr to insert or modify boot options in the UEFI subsystem (as mentioned in a Supermicro FAQ) ... At least if you are using an unsigned Linux kernel and no secure boot. It's technically feasible with Slackware (as explained here) but I never tested it.

I'm currently using Qemu version 6.2.0 along with Libvirt version 8.1.0. Libvirt is optional (especially if you hate XML ^^) but could be useful with a tool such as virt-manager.

There is no official Slackware packages for Qemu or Libvirt but thanks to slackbuilds.org, you do not have to start from nothing.

I recommand compiling Qemu with io_uring for best I/O performances. The slackbuild will take care of that if the dependency is already installed

I'm a big fan of this network storage appliance system. It's robust (based on ZFS), well maintained, with a solid community. It's also heavy on ressources (especially RAM, count at least 16GB).

There is an endless debate on whether or not to use ECC RAM ... Facts are :

SED encryption comes with a caveat in the case of PCI passthrough. Disks are indeed activated when the hypervisor starts up, not the Truenas VM ; and it resulted in SED operations (locking / unlocking) not working as intented in Truenas. I decided to use sedutil-cli in the hypervisor, before the Truenas VM starts up (disks are automatically locked when powered off). The operation of unlocking the drives is manual but the password isn't stored inside Truenas.

Command to define a password on a new SED drive :

Script example to unlock the drives :

But why using SED encryption in the first place ? Well, as mentioned earlier, the C3558 is a modest CPU and even if AES-NI instructions are available, I wanted to spare extra cycles. Moreover, I'm not paranoid about data encryption and I think SED is a sweet spot between performance and security. I ran a little bench with fio to illustrate this :

More CPU power is needed for SSDs to realize their full potential. But this particular setup cosumes ... 38W at full speed (it's powered on 24/7) and I just need to saturate a 1 Gb/s network.